Make your shopping for holiday gifts easier with these picks for your music loving friends and family. 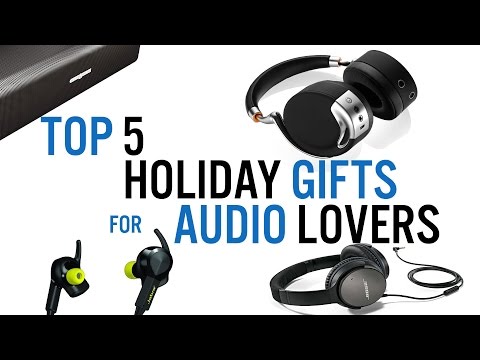 Assuming nobody ever hands you a list or tells you exactly what they want, choosing holiday gifts for friends or loved ones is never an easy thing. It’s even more difficult if you’re looking at buying an audio-related gift for someone, because there are just so many options out there.

Over the past two months, we’ve spent a lot of time picking our favorites in a lot of categories, and that can help you narrow down your search, but perhaps you’d like an even more condensed list of options, so here it is. If your target recipient is currently listening to Kind Of Blue on a $1000+ pair of headphones through a similarly priced DAC and amp, we can’t help you. For everybody else, it’s tough to go wrong with any of the following picks.

For anyone who spends a lot of time on the move, whether it’s a long commute or racking up frequent flyer miles, a good pair of noise canceling headphones is nearly essential. While far from the only game in town, Bose has been one of the most popular purveyors of portable peace for quite some time now. The Bose QuietComfort 25 are their latest effort, and they certainly live up to the hype.

The active noise cancellation is good enough to nearly silence a loud vacuum cleaner, and the sound quality is fantastic. Unlike previous generations, the Bose QuietComfort 25 will continue to work when the battery runs out, though the noise cancellation obviously won’t be an option. They sell for $299, but they’re worth every penny.

We haven’t reviewed the Parrot Zik 2.0 headphones yet, but our readers and viewers have recommended them so many times, we’re going to take their word for it. They bill themselves as the ‘world’s most advanced headphones,’ and looking at the features, we’re hard pressed to disagree.

Like the QuietComfort 25, the Zik headphones feature active noise cancellation, but they’ve also a ton of other features. In addition to Bluetooth connectivity, they also feature gesture-based controls, EQ presets, and are available in a variety of different colors. They sell for $399, and considering the feature set, that seems like a bargain.

While it’s flown under the radar somewhat, the Creative SoundBlaster ROAR remains one of the coolest speakers we’ve seen this year. It has everything you’d expect from a standard Bluetooth speaker, but that’s only the beginning of what this speaker can do.

The ROAR features a micro SD slot to function as a standalone music player, it works as a voice recorded, and plug it into your computer, and it even works as an external sound card / speaker. Did we mention it’s also a solid performer in the sound quality department? As the icing on the cake, it lists for $199 and is commonly found going for $149 online.

Have a friend or family member who loves music and is a fitness nut? You might as well stop looking for a gift right now, because you’re probably not going to do better than these earbuds.

This is not Jabra’s only pair of earbuds aimed at those who spend a lot of time at the gym, but they are the most advanced. They’ve still got the wings we’ve come to expect from sport earbuds, but they’ve also got a trick up their sleeve: a built-in heartrate monitor that, in combination with the Jabra Sport app, allows the wearer to keep track of their exercise routines. They sell for $199, but outclass any other fitness-tracking earbuds we’ve seen.

So far most of our gift options have been very specifically targeted, but what if you just want a great stocking stuffer for a budding audiophile? These earbuds may not offer much in the way of features, but they do offer great sound quality at an affordable price.

The Shure SE112 are the company’s most affordable earbud offering, but they don’t skimp on sound. They don’t even offer a built-in remote, but the extra long cable and included cleaning tool are more than you need if you’re just enjoying your tunes. At $49, with the limited feature set you know that every cent is going toward maximizing the sound quality.

Have you already made your purchases for this year? Were any of them on the list above, or were they different? Either way, help us and other readers out by sharing your picks in the comments.