This time of year typically doesn’t have any amazing and cool new announcements when it comes to audio, but that doesn’t mean that nothing happened. In fact, that lull in major announcements has allowed some … 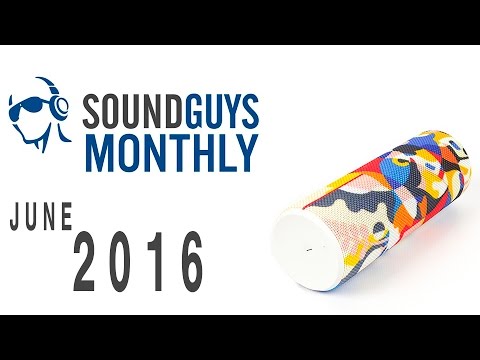 This time of year typically doesn’t have any amazing and cool new announcements when it comes to audio, but that doesn’t mean that nothing happened. In fact, that lull in major announcements has allowed some innovative new products to come to the forefront. For one, phone manufacturer Nextbit has a new pair of headphones, kind of. And Google now has a Bluetooth speaker, kind of. This is Sound Guys Monthly. Until we get a great pair of truly wireless earbuds, companies are going to keep trying to make them. This time, we’re hoping the Apollo 7 earbuds are as good as they seem. We’ve seen companies like Bragi and Earin try to capture the wireless earbud market, but neither has really taken off. Now a company by the name of Erato Audio Technology is giving it another go with a pair of earbuds called Apollo 7. They have a lot going for them with Bluetooth 4.1 with aptX, a 3 hour battery with a charging case for that extra boost, and even some pretty good first impressions from people who have heard them. Still, they’re not cheap and at $299 I would hope they work close to perfectly. As of right now the campaign is completely funded and backers can expect to get their pair — this month, June of 2016.

Nextbit has partnered with AIAIAI for a pair of custom headphones Your average phone manufacturer usually doesn’t spend too much time worrying about audio, but Nextbit isn’t your average phone manufacturer. Nextbit has been making waves in the phone industry because of their new phone the Nextbit Robin. In the simplest of terms, the phone uses cloud storage so that the user will basically never run out of memory. That’s all well and good, but what interests us at Sound Guys are the cool pair of headphones that popped up on their website. Nextbit partnered with AIAIAI to make a custom pair of TMA-2 headphones. These headphones are modular, so they pieced it together and made the cable the same shade of turquoise as their phone. Pretty clever.

The Nepsu Triangle can match your home decor Pretty much every company has a wireless speaker now, so how does one stand out? Well, the new Nepsu Triangle would rather blend in. The Nepsu Triangle is a new wireless speaker that lets you swap out parts of the speaker to change the color and match your decor. The front plate is magnetic so you can easily pop it off and stick a new one on. Even the power supply can be changed and with a few clever wall decals you can make the speaker a part of your decor instead of just a gadget. The campaign is about 72% funded at the time of this post so if this seems like it interests you, you still have 19 days to back the project on Indiegogo. Google is probably most known for services like search, but they like to dabble in hardware every now and then and at Google I/O this month they announced — a wireless speaker? Okay so it’s a bit more than a speaker. In response to the Amazon Echo Google has announced Google Home, a speaker with their new and improved virtual assistant baked in. It’s like having Google Now if your speaker. Some day soon they expect you’ll be able to stream things to your TV and control parts of your house simply by talking with the speaker and telling it to do something. No word yet on pricing but Google says it’ll be available sometime later this year. The UE Roll 360 was a pretty unique device, and plenty of people seemed to love it. Throw in the fact that it was less than $100 and waterproof and it’s no wonder why it did so well. Now they’ve announced the UE Roll 2 and — well, there’s not much to it. It now has a claimed range of 100 feet instead of 65 (just like the UE Boom 2) and is supposedly 15% louder. Everything else about the speaker from the battery life to the design was kept identical, so if you already have a UE Roll there really isn’t a need to upgrade. But if you don’t have one yet, maybe this will convince you. We reviewed a couple of things this past month, but the best of May had to be the Libratone Zipp. The Libratone Zipp is a wireless speaker, letting you play music via Bluetooth or over Wi-Fi. It has a fabric covering that you can unzip (hence the name) and swap out for any of the other colors that Libratone sells. If you download the app you can do way more with the speaker including listen to FM radio, which isn’t something you see too often in speakers nowadays. Of course like any product, there were some kinks with the speaker but one thing that doesn’t need fixing is the sound. The speaker really impressed us with sound quality so if that’s what you care most about definitely check it out. If you’re in the market for some wireless headphones, why not go with he on-ear variety. At less than $100, the Skullcandy Grind Wireless are this month’s bang for your buck pick. Let’s be honest, Skullcandy isn’t a name you think of when it comes to amazing products. And even though calling the Grind Wireless amazing might be a bit of a stretch, they’re still pretty good. The biggest problem I had with it was the 12 hour battery life, but besides that they have a really strong connection, decent sound, and a nice design. The Internet is a big place and there’s a lot of information out there. Luckily, we gathered up as much as we could about the best products in audio and made more than a few best lists. This month we’re going to recommend the best Bluetooth speakers under $100. If you want a Bluetooth speaker but aren’t looking to spend hundreds of dollars on something like the Libratone Zipp, you might find this list interesting. We’ve taken some of the best Bluetooth speakers we could find for under a Benjamin and put them all on one page. So make sure to give it a look. All right, so time to announce this months winner of the Jaybird X2’s. If your name is Kyle S. and you live in the US, congratulations! You just won a free pair of Jaybird X2’s. If your name is something else don’t feel bad, we have another giveaway. This month we’re giving away a UE Boom 2 so if you want a free waterproof speaker for the summer, now’s your chance. The giveaway is international so anyone can win, all you have to do is enter the giveaway via the widget below. Good luck everyone!

AIAIAI turns to Kickstarter to make the TMA-2 wireless

Nextbit made a custom pair of AIAIAI TMA-2 headphones