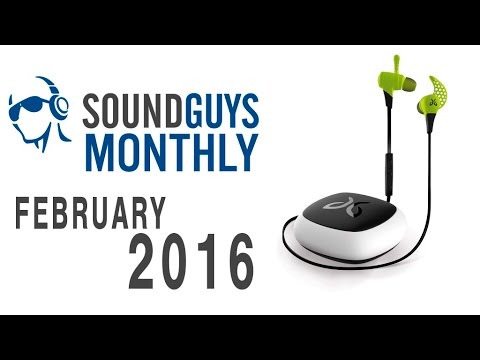 CES was at the beginning of this past month, so you know there’s some cool news to tell. Fitness headphones, turntables, and something called a Boomstick are just some of the things we’ll cover in this month’s Sound Guys Monthly.

By the way if your name is Shehan H. and you live in Sri Lanka, congratulations you’re the winner of a pair of Master and Dynamic MW60 headphones. Hope you enjoy them! If you’re not Shehan don’t worry, we’re doing another giveaway this month. Keep on reading to find out how to enter. At the beginning of January Jaybird announced not one, but two new pairs of fitness headphones. Of course they announced the successors to the X2 headphones (aptly named the X3s) but they also announced a second pair of wireless buds called the Freedoms. The X3 have a 7 hour battery life while the Freedoms have a 4 hour battery. BUT, the Freedoms come with a small charging clip that adds another 4 hours of juice, totaling at 8 hours. Both have Bluetooth 4.0, are sweatproof, and have customizable EQ profiles that save to the hardware of the headphones. They’re not out yet but when they become available later this year, the X3 will cost $149 and the Freedoms $199. Misfit took a slightly different approach when it came to these headphones as all of the tech that usually goes in the control module on the wire connecting the earbuds is found instead inside the clip. Of course, you’ll also be able to do fitness things like track your steps, distance walked, and calories burned. Misfit claims that the headphones have an 8-10 hour battery life and can also be used as a clicker to control your presentations, if you really want to be that guy. There’s no word on pricing yet but they will be available sometime this Spring. Everyone is trying to get in on the fitness market, so it’s no surprise to see JBL and Under Armour team up for two pretty cool pairs of wireless earbuds. The first are the UA Headphones Wireless which come in the classic in-ear form with an 8 hour battery life. The second are the UA Headphones Wireless Heart Rate which come in a clip-on flavor similar to the Powerbeats. These have a 5 hour battery life but can also track your heart rate and display the data accordingly in an app. Pretty cool stuff if you’re really into fitness. Both are sweatproof but not the same price. The UA Headphones Wireless are available now for $180 and the Heart Rate headphones are coming this Spring for $250. Long story short, the Boomstick works similarly to a DAC. Plug it into your source device, then plug your headphones to the Boomstick and voila! Better audio. However the Boomstick differs from your typical DAC in that it doesn’t really convert the electrical signal into analog. Instead it uses algorithms to fine tune the signal to get maximum clarity based on the headphones that are plugged in. Think of it as a way to optimize your headphones rather than optimize the sound. The new turntable is called the PS-HX500 and does more than just play your vinyl record, though that is a big part of it. Besides that, the turntable will also convert the vinyl into a hi-res audio file that you can play back in its full glory when you’re on-the-go, assuming of course that you can a device capable of storing and playing those files. Sony is quickly building an ecosystem around lossless playback and although I personally don’t have one of their hi-res walkmans, this turntable make me kind of want one. We were pretty busy this past month but we were still able to check out some pretty sick gear. The coolest thing we saw last month had to be the Lola headphones by Blue. Though we weren’t quite sure who the Lolas were for, that didn’t stop us from enjoying them. The headphones have a unique adjustment method and also just look pretty damn awesome. The black and white — actually the entire look in general is very Storm Trooper-esk and definitely fits the Star Wars vibe that has swept the world. They’re comfortable, have a really good sound, and do a great job at passively blocking outside noise. They’re not the most portable of things, but if you’re looking for a pair of over-ear cans to keep at your desk then they more than get the job done. The Lolas aren’t extremely expensive, but they aren’t cheap. If you want something inexpensive but good, check out the Anker Premium, our pick for best bang for your buck. It should come as no surprise that Anker made yet another good product for not a lot of money. The Premium was one of the most asked about speakers we ever got so make sure to check out the full review if you want to know all of the gritty details. If you’re in a rush heres the cliff notes version: Looks nice, strong low end, kinda portable but would probably do better on your desk rather than your backpack. Oh and I still hate those damn buttons, but that can be overlooked thanks to sound quality.

Looking for the Best? Your search stops here. We’ve got some picks that you’ve probably heard of before like the Jaybird X2‘s, and some that may have slipped under the radar. Either way if you’re a runner or looking to get into running, make sure to check out this best list.

If you didn’t win don’t feel bad, we have another giveaway for you this month as promised. Though the X3s are coming out later this year, they’re not available for purchase just yet. Besides, even if they were who doesn’t want a free pair of headphones?

If you do, make sure to follow the links below to enter the giveaway and win yourself a new pair of wireless ‘buds. Our giveaway is international because music has no borders. Hopefully you can be the next winner, good luck!