March was another big month in the world of audio. We reviewed more great products (including our first sound bar) and some of our favorite manufacturers announced new products in lines we’ve already given positive … 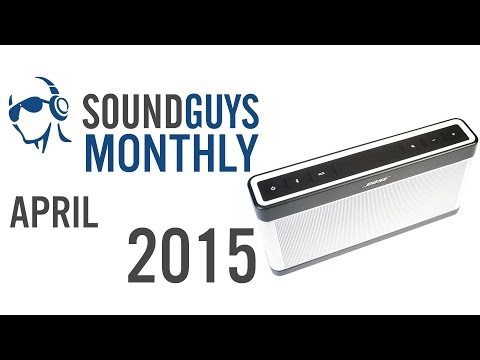 March was another big month in the world of audio. We reviewed more great products (including our first sound bar) and some of our favorite manufacturers announced new products in lines we’ve already given positive reviews to. Plus, there was a heavy dose of the usual crazy audio stuff on Kickstarter, and that never gets old.

In the BSP60, Sony has combined all the usual features you’d expect in a Bluetooth speaker – NFC, Bluetooth 4.0 – with some features you might not expect, like the ability to respond to voice commands. It’s a new take on the classic speaker / alarm clock, only a little pricier.

You can now demo in-ears at participating Apple stores

It’s always a risky feeling buying a new pair of in-ears. Will they fit? What about the sound? Now just head down to your closest Apple store and they’ll be happy to help you try out as many pairs as you like. Don’t worry – it’s more sanitary than it sounds.

Combining a Bluetooth speaker with some other type of device is becoming more and more common, and it doesn’t look as if the trend will end any time soon. This Kickstarter project aims to combine a speaker with a HEPA air filter. Cleaner air with a side of music? We’ll take two.

The Creative Sound Blaster ROAR SR20 was one of our favorite speakers of 2014. It sounded great, had a ton of features and the price tag was surprisingly light. Creative has announced a speaker, and it looks bigger, better, and yes, more expensive.

Last year we reviewed two speakers in Sony’s SRS line – the SRS-X3 and the SRS-X7 – and were impressed with both. Sony has decided to expand the line with three new speakers: the SRS-X11, SRS-X33, and SRS-X55. They range from $69 to $179, and while there is no release date yet, we’re looking forward to checking them out.

As mentioned at the top of the article, the Definitive W Studio was our first sound bar review, and it was good enough to get our pick for coolest of the month. It sells for $1299, but if you’re looking for a higher-end sound bar, it’s absolutely worth a look.

In March we reviewed three separate pairs of low-cost earbuds, and much to our surprise, all of them were actually good. Even so, the LH Labs Verb stood out. Combining a solid yet light build with good sound quality, the Verbs are well worth the $39 price tag.

Congratulations to the winner of last month’s giveaway, the Sennheiser Momentum On-ears, Prabhu Muthu. For this month, we’re giving away another Bose SoundLink 3. For all the details, on how to win, check out the details below!